Anne Glad’s jolly Christmas party
Christmas sounds like angels in Anne Glad’s poetic and lively universe, where a sparkling collection of beautiful angels literally ring in the season with delicate little brass bells. Anne Glad’s table is inspired by Queen Margrethe’s unique and colourful Christmas seal from 1970, called “Juleforberedelser i Engleborg” (Christmas preparations at Angel Castle). The beautiful Christmas seal has been enlarged to make a giant angel castle that imperceptibly entices the guest to come closer. In front of the castle, Anne Glad has set a 10-metre-long midnight blue table, which becomes a symbolic road to the heavenly castle magically leading the guests inside. The table is set with Royal Copenhagen’s new Blue Fluted pattern, which matches the Christmas seal perfectly, while its cool surface structure brings to mind the stoneware of the ’70s. The Flora Danica pattern, on the other hand, complements the colours of the angel castle with its playful, almost psychedelic, energy. The informal mix of orange chairs and benches around the table signifies inclusiveness, showing that there is always room for one more. Anne Glad’s table is also a tribute to the family’s tradition of collecting Christmas seals and embraces her own love of the traditional seals.

“I grew up with a mother, grandmother and aunt who collected Christmas seals – and the seal from 1970 has always been my favourite. I especially love the Queen’s delicate and simple designs and the lush colours. It is at once explosive and tightly controlled. I imagine a lively and festive women’s commune where everyone was busy with the preparations to celebrate Mary and her baby. There is room for everyone at the table – and I’ve taken the liberty to invite several of the coolest women of our day, as you can see on the place cards,” says Anne Glad.

“I visited a Christmas Seal Home last year and was impressed by the difference a stay there made for the children. Not only do they get a break from daily life and establish good eating, school and exercise habits, but they also get a boost in self-confidence. Happier, stronger and better geared for life. Unfortunately, the tradition of sending Christmas cards by mail no longer has the same support as it once did, and the Christmas Seal Fund is in need of more funding. So even if you know that you won’t find the time to send out Christmas cards this year, please buy a couple of sheets of seals. They also add a decorative touch to Christmas presents,” says Anne Glad. 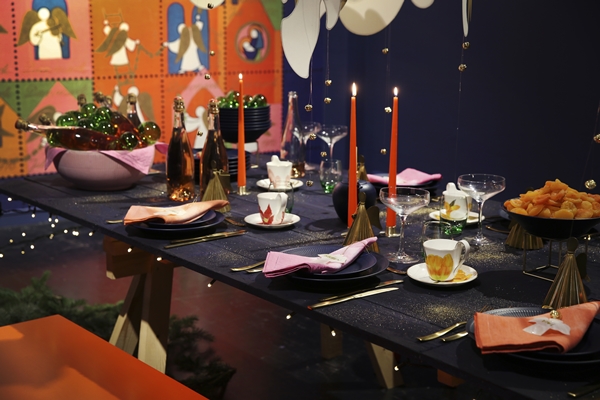 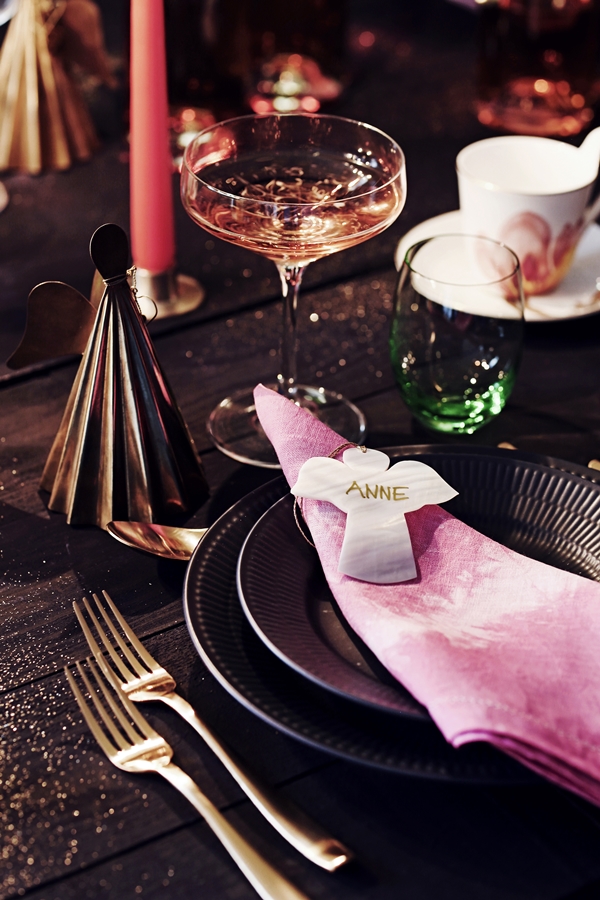 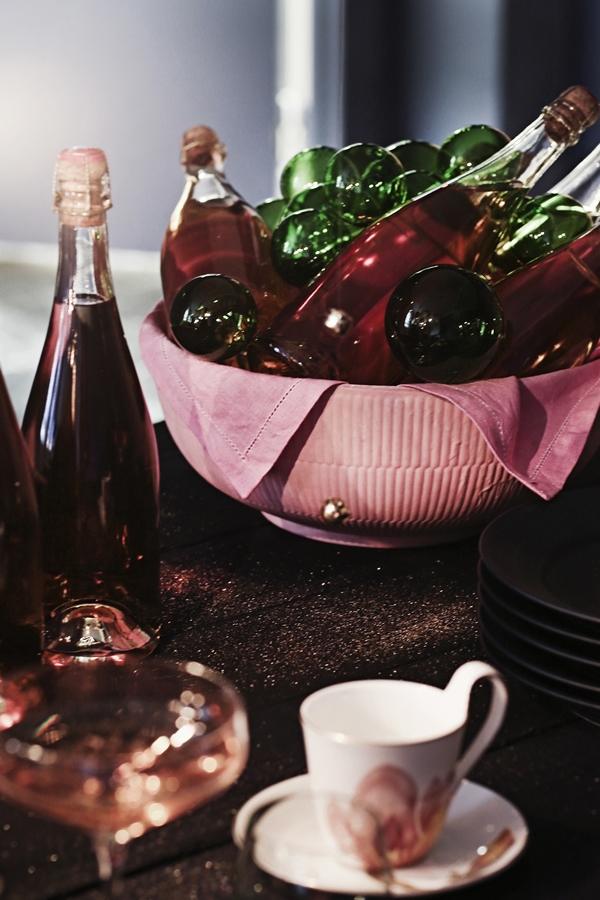 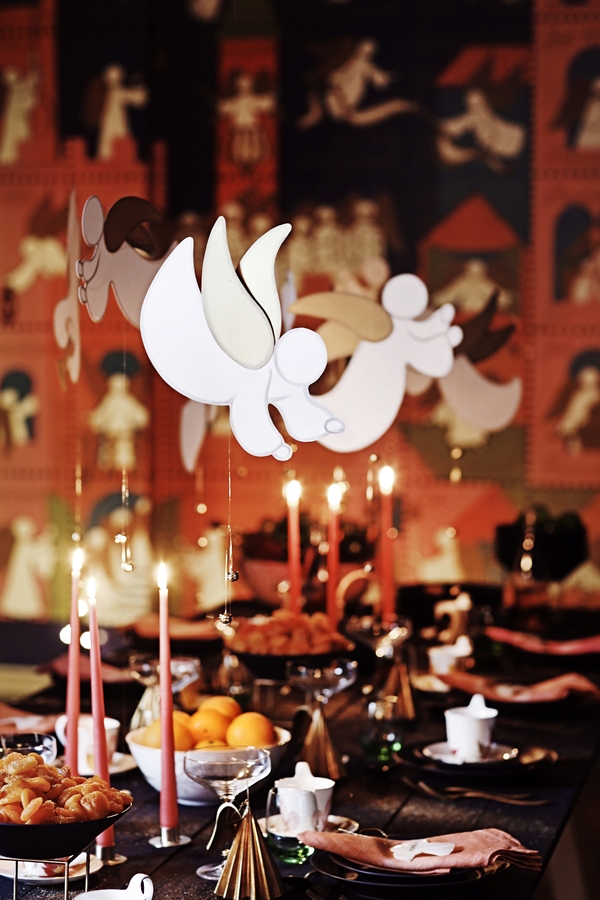 Jakob Kühnel’s Christmas seal celebration
Jakob Kühnel is the designer behind this year’s Christmas seal and, not surprisingly, his table brings the atmosphere, colours and motifs of the seal to life. With a partiality for graphic expression, his table is laid in a universe of clean lines, where Royal Copenhagen’s new Black Fluted pattern emphasises and plays up to the beautiful and calm simplicity that still exudes Christmas. The table, like this year’s Christmas seal, is classic with a modern twist, featuring, among other things two bellowing elk and delicate cats peeking out from under plates where traditional Danish rice pudding is served. This clean-cut universe is contrasted beautifully by Christmas red amaryllis. 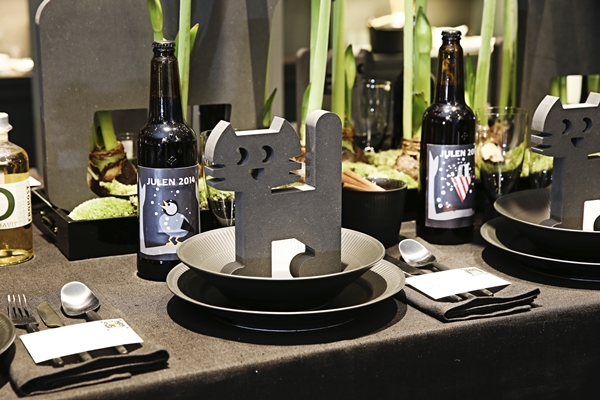 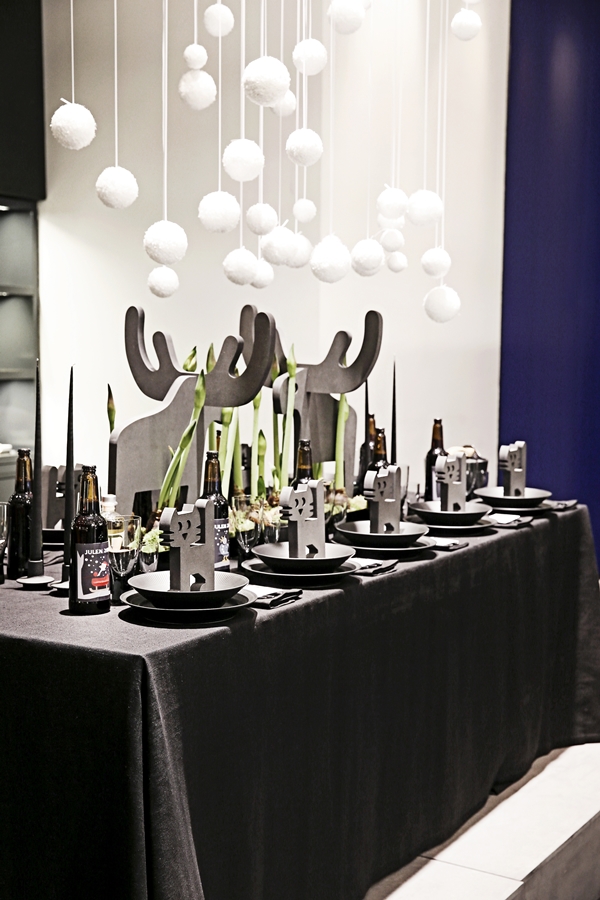 Ole Henriksen’s spirited Hollywood Christmas
Blazing flashes à la Hollywood light up the scene when you step into the grand and elegant dining room of beauty guru and Hollywood darling Ole Henriksen. The humdrum of daily life disappears as the magic of Beverly Hills reveals itself when you approach the impressive table laid out by Ole for those he holds dearest, including his husband Laurance and his mother Anny. The beautiful table in all its grandeur is exquisitely laid out with the Blue Fluted porcelain which Ole grew up with and which he serves dinners on in Hollywood. With almost decadent elegance, the table and the windows are dressed with impressive flower arrangements, and a giant fir garland brimming with ornaments winds its way across the ceiling, decoratively bringing the entire room together. The display cases containing some of Ole Henriksen’s beauty products, which made him famous in L.A., add an exclusive, spa-like atmosphere. There is a strong sense of Ole’s famed balance and positive energy.

“I’ve always wanted to create a Christmas table for Royal Copenhagen. When I lived in Copenhagen, it was tradition to see the exhibition every December, and I am deeply honoured to have been invited set one of the famous tables. I just love the Blue Fluted pattern, so getting to lay a Danish holiday table with this iconic and beautiful pattern is a wonder Christmas present. We actually use the beautiful Blue Fluted Mega every day at home in Beverly Hills, because it represents to us some of the finest of Danish design. At the same time, I am an ambassador for the Christmas Seal Fund, and I’m delighted to be able to call attention to their cause,” says Ole Henriksen.

“I think it’s important that they help children who are having difficulties. I myself was bullied as a child, so it is an important issue for me to be able help those whose lives are difficult,” says Ole Henriksen. 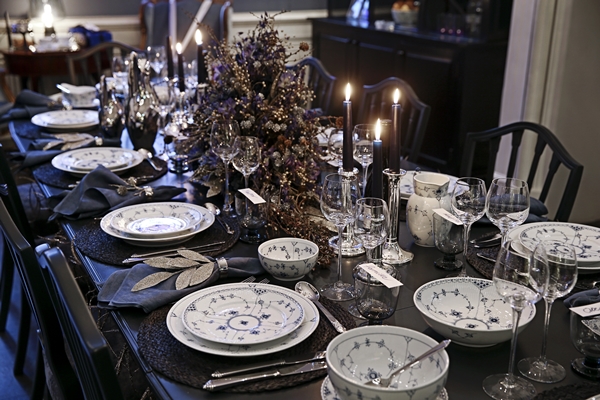 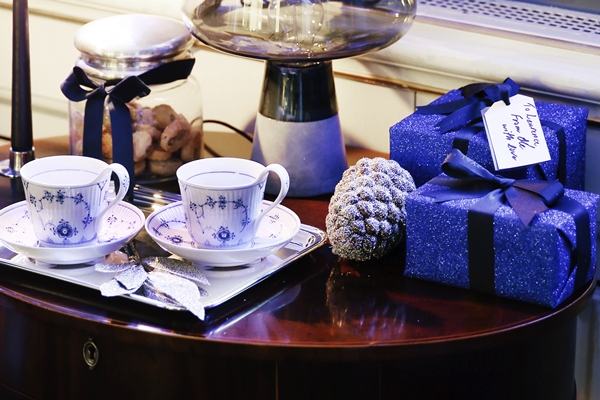 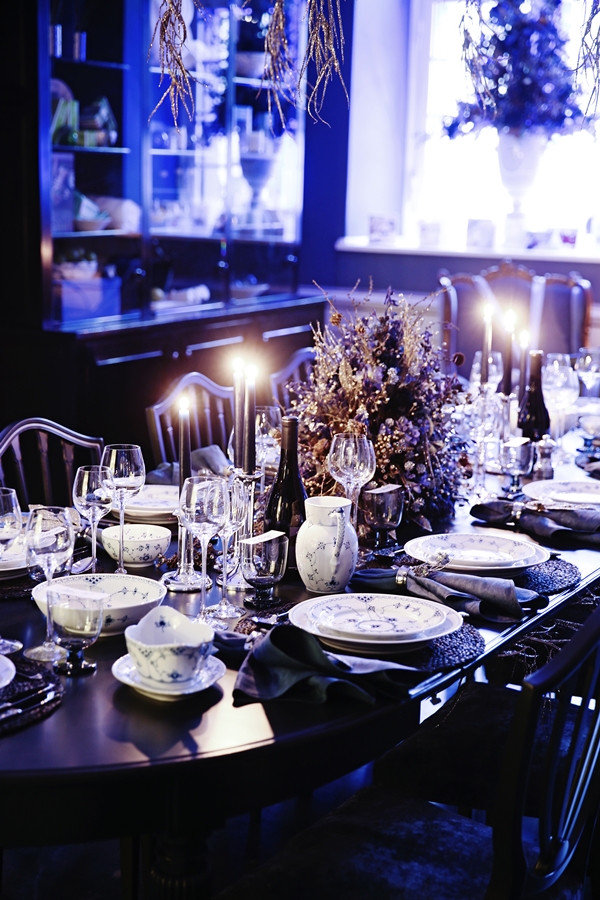 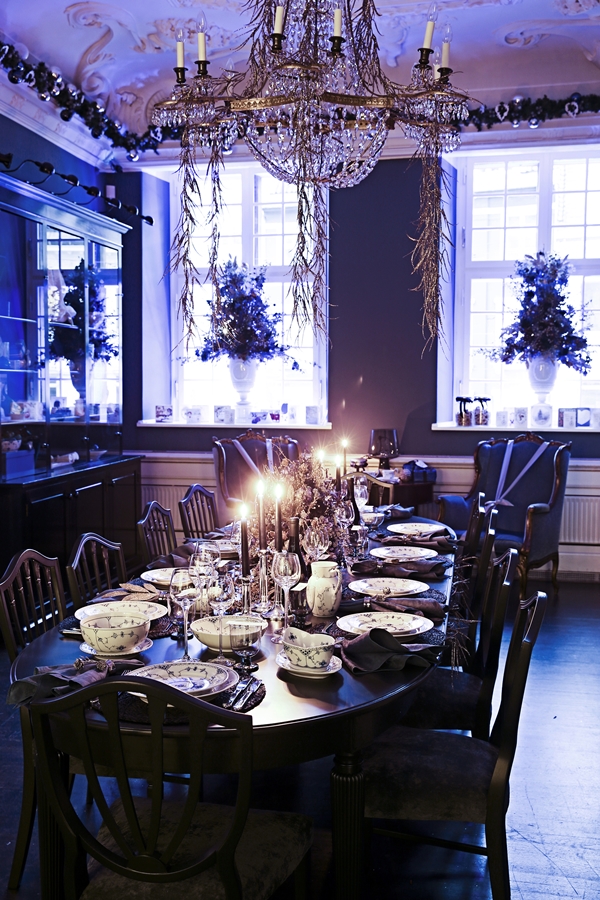 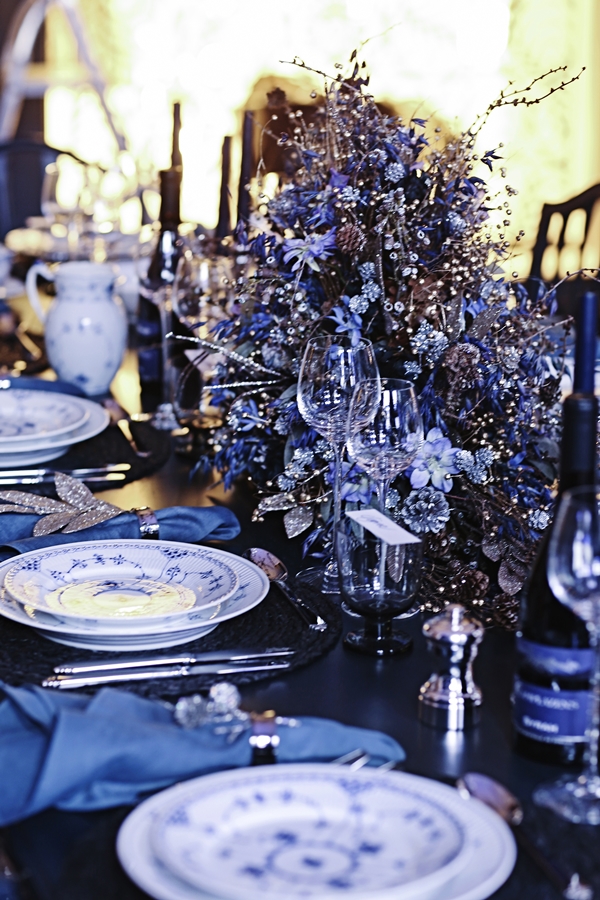 The royal contrasts of Shane Brox
If you enjoy the sublime creativity and fantastical world of designer and television host Shane Brox, you will love his Christmas table. His rich imaginary world comes to life in the contrast between the fine and the humble, where the world’s most exclusive porcelain pattern, Flora Danica, is surrounded by wondrous creations made from cardboard and empty toilet paper rolls. On this impressive table, an enchanting and unusual tale unfolds that tempts guests to add to the story and brings a smile to their lips. We are met by a vision of a crashed paper airplane piloted by an old, worn bear. Father Christmas’ present plane has crashed in the middle of Factory Owner von Bragsalot’s Christmas table and to everyone’ horror, some of his fine and very expensive porcelain has been broken. The Factory Owner made the money to buy the beautiful porcelain by baking Christmas cookies at his impressive cookie factory made of cardboard. The table is a vision of organised and deliberate chaos, where both Christmas cookies and the skinny little lap dogs belonging to the factory owner’s wife are all abuzz with the pandemonium and desperately trying to wake up von Bragsalot from a sound sleep. For he sleeps in as all real Factory Managers do. The scene poses the following questions, which only the guest can answer: Can you see which chair belongs to the roly-poly Factory Owner? Can you see which one belongs to his neurotic wife? And where do you think the hardworking palace builders are most graciously permitted to take a plop? 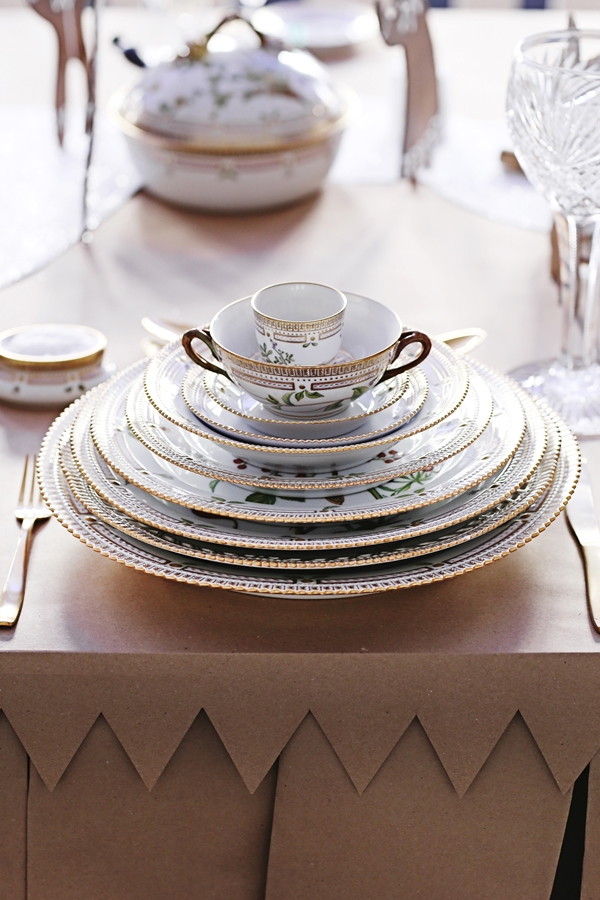 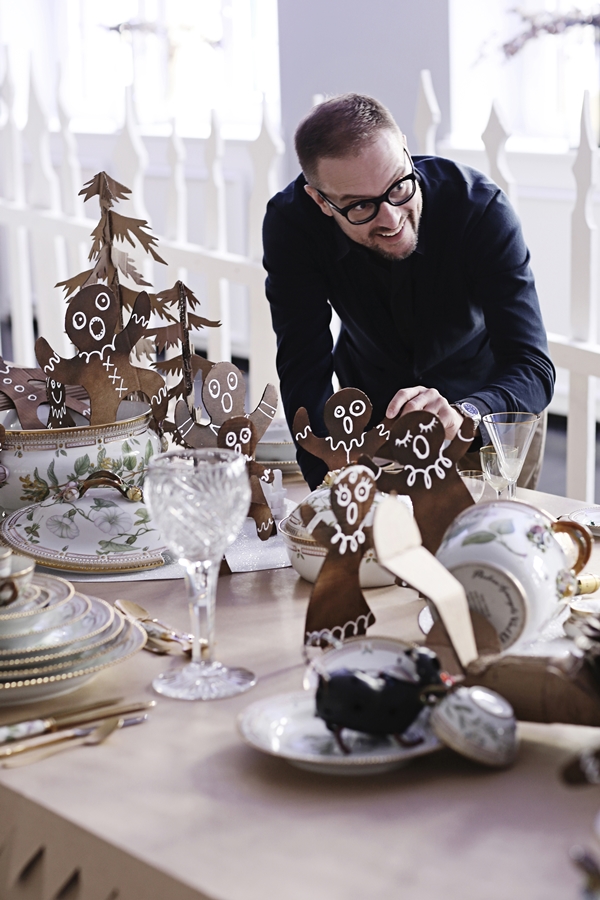 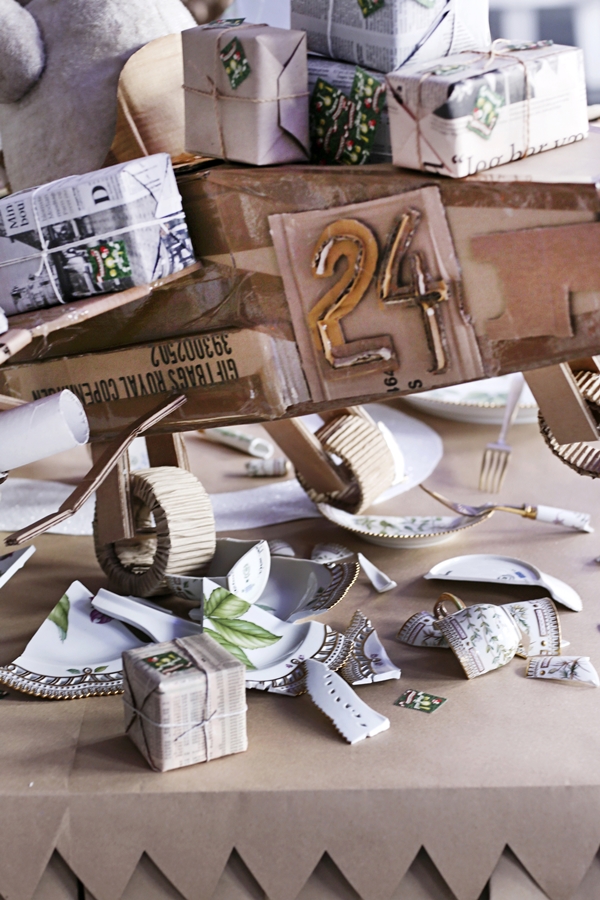 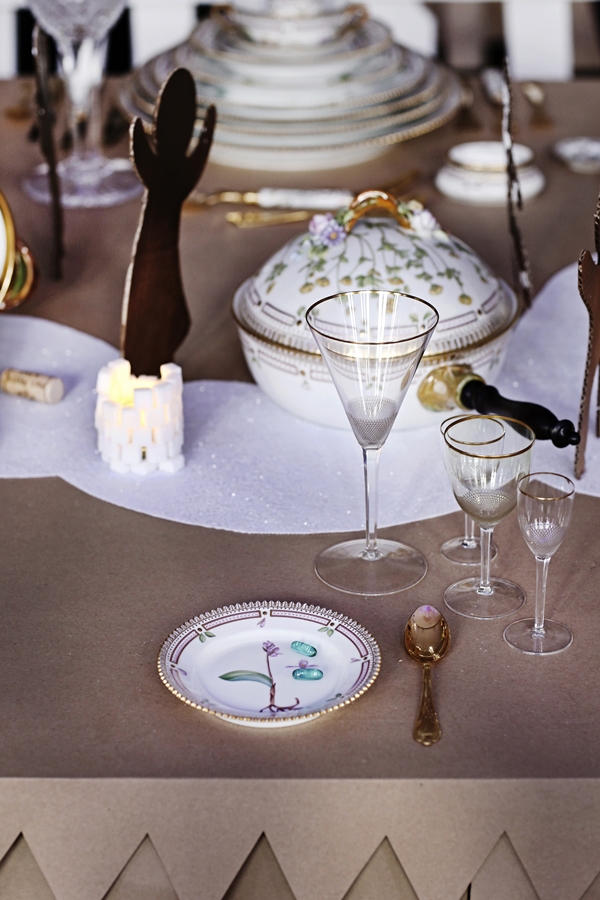 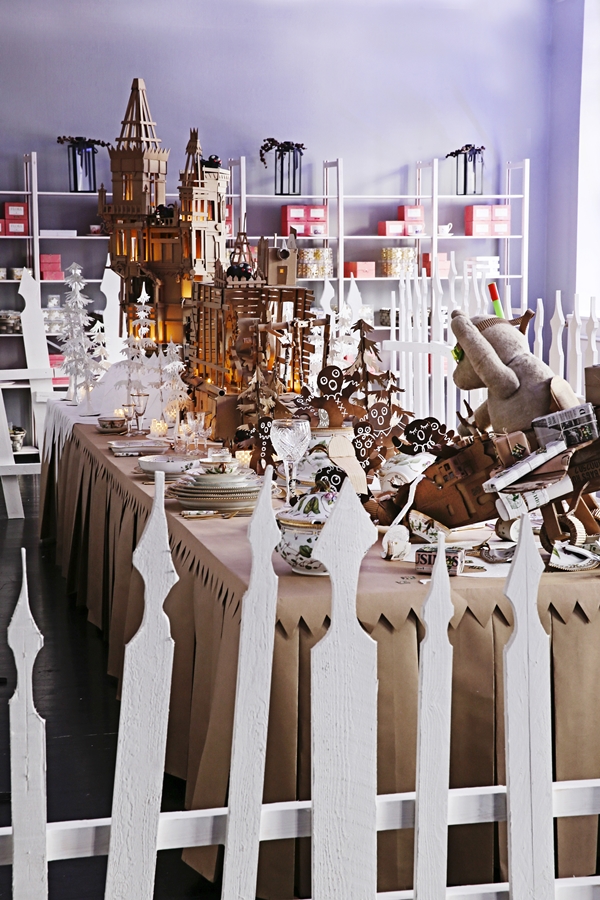 Signe Lindkvist – My personal snowglobe
Signe Lindkvist’s fun and crazy Christmas universe for Instagram buffs and the young at heart is a reflection on our propensity for self-exposure and the magic of Christmas. With the words “Sne Lige Mig” (a pun on the Danish words for snow and see/look) in neon, we are invited to the quirky and informal Christmas table laid out inside a giant snowglobe, a souvenir shop classic all over the world. Stand under the sign and take a Christmas selfie in the falling snow. The table is a sparkling disco ball colourfully set with porcelain from Royal Copenhagen’s many different patterns, including Multicoloured Elements, Blue Fluted Full Lace and the Seagull pattern, which Signe Lindkvist is particularly fond of.

“I’ve always loved snowglobes. And I can’t think of a prettier or more magical place to have Christmas dinner than in that winter landscape. It’s been a dream of mine since I was a kid. I have chosen to invite everyone in to take a selfie as an affectionate commentary on the social media life we all live. At the same time, I’m delighted to be able to highlight such a worthy cause by contributing to this collaboration between Royal Copenhagen and the Christmas Seal Fund. It’s important to me to do something to help children in difficult situations,” says Signe Lindkvist.

Signe Schollert Lindkvist grew up in a family of ceramicists and ceramics still play a major role in her life with her sister carrying the ceramicist tradition into its fourth generation. For Signe, there will always be a special place in her heart for faïence, porcelain and stoneware. 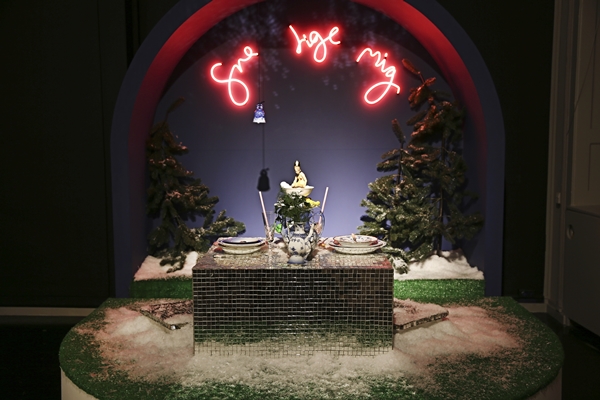 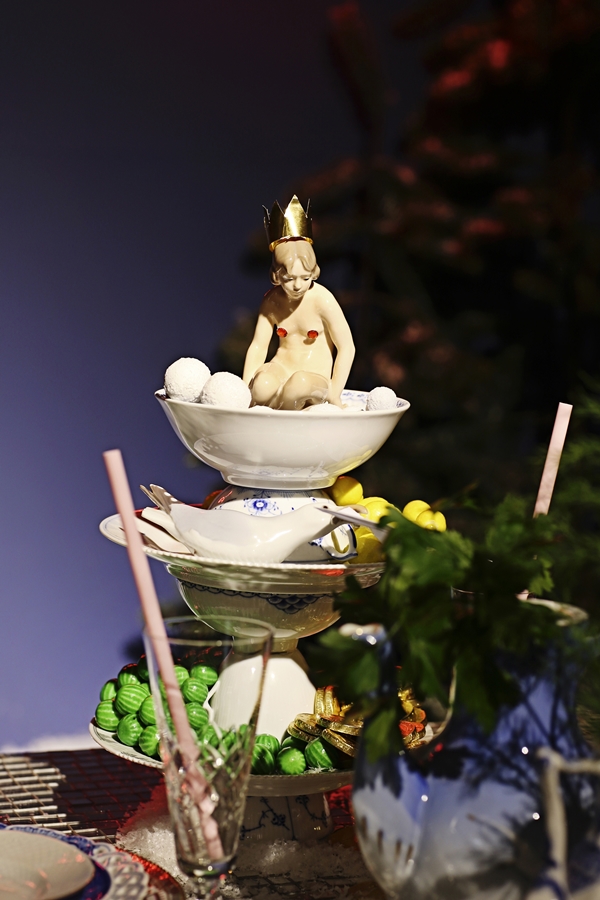 Thomas Evers Poulsen’s dancing Christmas cheer
Guests are invited to merry dancing and dining when dancer Thomas Evers Poulsen welcomes guests to a lavish Christmas dinner. The beautiful round table is laid with sparkling crystal from the ’40s and Black Fluted Mega, which is one of the many Royal Copenhagen patterns to have written design history. The pattern is more than just porcelain – it has become a modern designer object and proof that even the best traditions can stand to be challenged. Thomas Evers Poulsen has set the table with the pattern’s beautiful platters used here as plates, to present the Christmas delicacies to best effect. After dinner, guests are invited to dance, and for inspiration the long wall features clippings from Thomas’ long career as a professional dancer. Thomas Evers Poulsen is an ambassador of the Christmas Seal Fund and has supported the fund’s work at a variety of events. Thomas is glowing with motivation, when it comes to helping the many children who stay at the Danish Christmas Seal Homes every year – for he too has felt the social and emotional consequences of not fitting in.

“I can’t tell you how delighted I am that Royal Copenhagen is now calling attention to the Christmas Seal Fund and the tremendous work they are doing to help children in difficulties. I myself had a difficult childhood, where I was bullied, so I know the difference the Christmas Seal Homes make when the take children under their wings,” says Thomas Evers Poulsen. 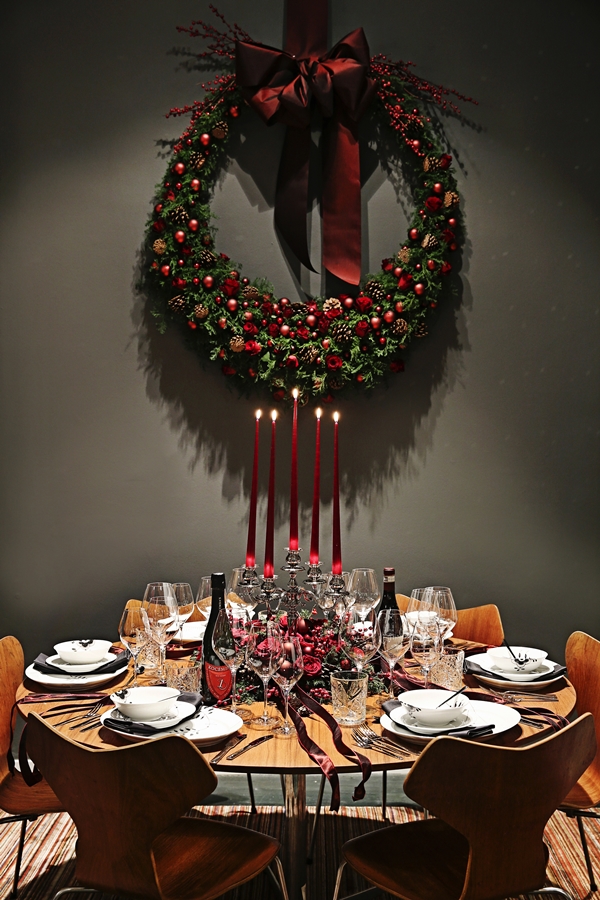 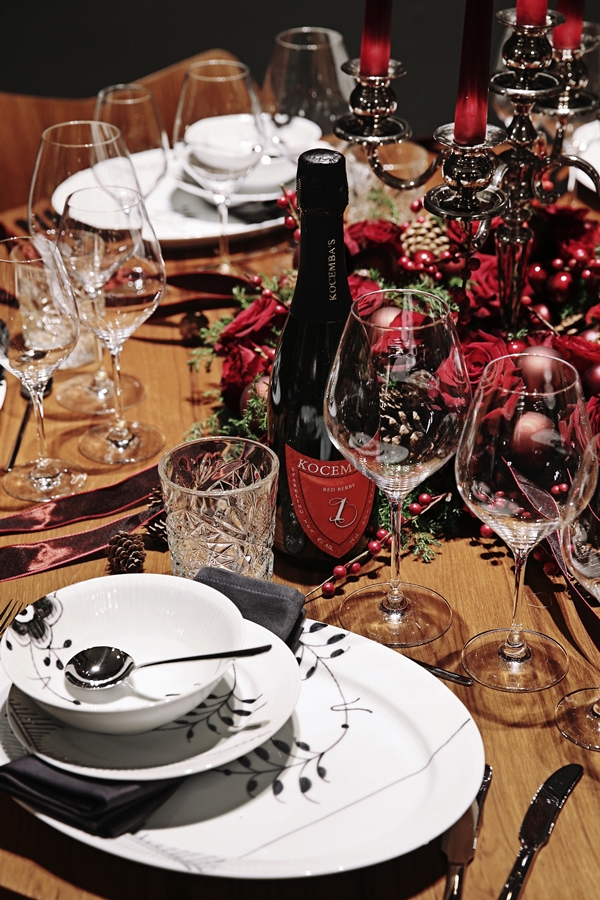 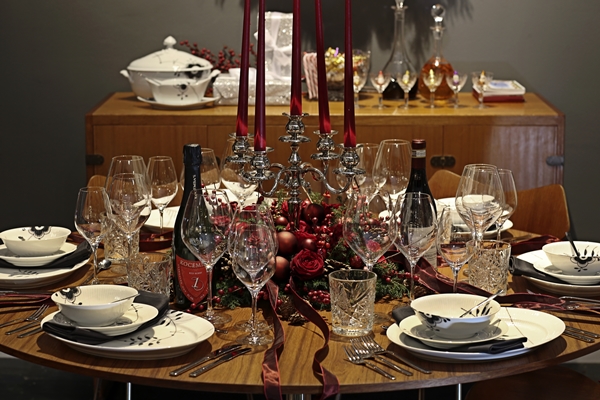